On the lead up to our confirmation, the sixth class pupils of Kiltiernan NS went to visit the cathedral in Galway with our friends from Labane NS and Ballyglass NS, courtesy of our parish priest, Father Roche. We got on the bus and arrived at the cathedral a while later. When we got there, Father Roche showed us around the outside. The carvings over the door and all around the outside of the building were so cool, and Father Roche did a great job explaining them all.
When we went in, Father Whelan, another priest, showed us around and explained all the chairs in the middle. Cathedra means chair, so that’s where they got the name Cathedral.
Next the organist showed us how the church organ works and played for us. He was really talented.
Later Father Whelan showed us the Stations of the Cross and the abstract stained glass windows.
Lastly, we saw the crypt where the previous bishops’ bodies are laid to rest. It was cold and a bit creepy, but very interesting too.
Before we went back to school, we made a quick stop at Supermacs. We had burgers and nuggets, and ice cream for afters.
I had a really great day thanks to Father Roche! 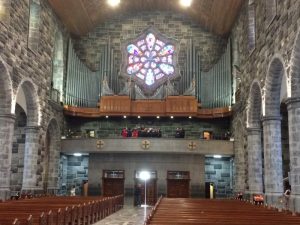 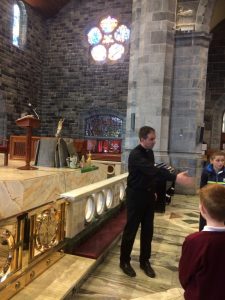 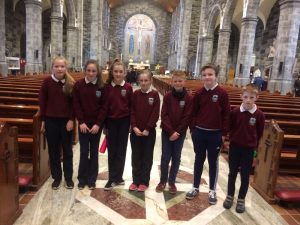