On the 20th of January and the 11th of February our school competed in two Debating Competitions. This is the first year of our school involved in the project which is sponsored by Galway Education Centre. We had many visits from Margaret Martins, who taught us how to use our organs of articulation, how to project our voices, the importance of  hand gestures and  clear annunciation.

In our first debate, Chloe, Hannah and Ian represented our school. The debate was held in Oranmore Library at 10.15am on the 20th of January.We were opposing the motion that “Books are better than Movies”. Our opponents were Northampton N.S. Our team unfortunately were not successful in our arguments.

In our second debate, Oisin, Chloe and Eoghan represented our school. It was also held in Oranmore Library at 10.30am on the 11th of February. We were proposing the motion that “Child Performers Should be Banned” Our opponents were Gort Convent School. I am really disappointed that we didn’t win this debate either but it was a great experience.

By Eoghan and James 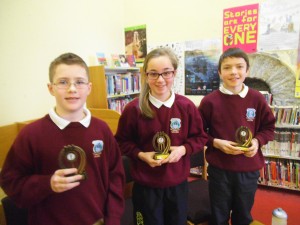