I woke up jumping out of bed with exhilaration. “I can’t believe it is here! The day of Peace Proms 2016!!!,” I said nearly bursting out of my pyjamas. I ran down stairs and got dressed straight away into my white top and black jeans. I scoffed up my breakfast and hopped into the car. We were meeting a bus at school, that was going to bring us to the Kingfisher Hall in Galway. On the bus, I sat beside Erin. When we got there we lined up. I was jumping up and down because I had never been involved in a concert this big before. I charged into the hall exclaiming “Wow!” The practice started at around half eleven. We began with the ‘Friends Medley’ followed by ‘Imagine’ written by John Lennon. Thirdly we practiced the ‘Matilda Medley’ and then we sang ‘You’re the Voice’. We ended the practice with an hours long lunch break and a stretch of our legs. The concert began at two o clock. The orchestra played a piece from the movie ‘Mission Impossible’. The flashing lights beamed at us as we sang our songs. We brought sunglasses for the song ‘Uptown Funk in the ‘Pop Medley’. We sang a song that conductor Greg Beardsell said was the symbol of bravery. It was called ‘Touch the Sky’ from the movie ‘Brave’. I think I might have over exaggerated a little bit when Star Wars came into our section of our bleacher stand. I added a few more moves to the ‘Matilda Medley’ when there were only moves to ‘Revolting Children’. I smiled with pride as the audience clapped for us doing our outstanding singing. My favourite song I performed was ‘Power of the Dream’ which we sang with a soprano soloist. There was also a Scottish Pipe Band and some Scottish dancers from Belfast. A little bit more into the show there was Irish dancers from the Hessian School of Dance. The final song of the day was Irelands Call and everyone joined in with the singing. After the concert I had a chat with my friends. It was a brilliant day and concert. I had the best time ever!!! 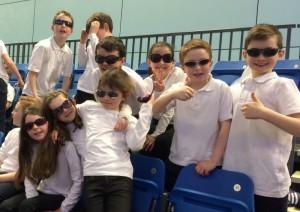 All Ireland Community Games Camogie u14 Champions
Scroll to top