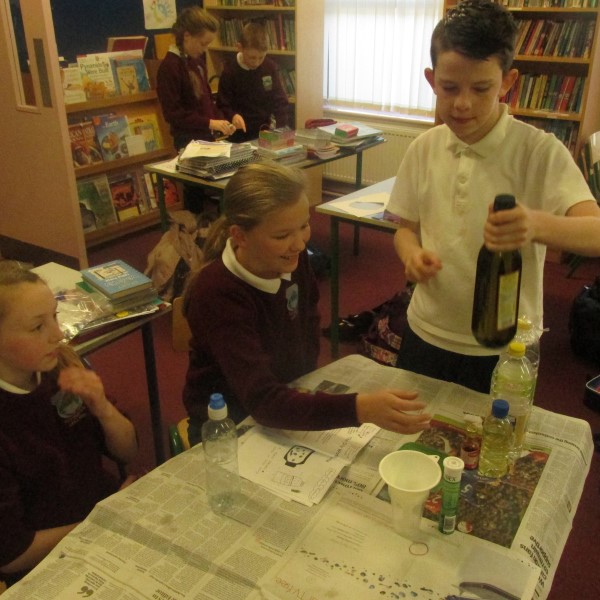 This year Science Week 2016 ran from 14th to the 25th of November    .We have been celebrating science week by putting some experiments to the test. Everyone in fifth and sixth class were allocated into groups of three and then given an experiment.

In my group was Diarmuid, Grace and I .We got the experiment ‘Oily water bottle’ or ‘lava lamp’. We got to test our experiments the day before we showed them to the class. We were given the instructions and told to read them carefully .Next we got out all of are ingredients out that we needed to make the lava lamp. We got a 1-litre bottle and we also had a litre of vegetable oil .We then poured all of the oil into the bottle (forgetting we needed some for the following day!) next, we added a few drops of food colouring into the water and then we shook the bottle. As we, all thought we were very experienced scientists we forgot all about the instructions and ended up making something completely different to what it was meant to be.

The next day it was our last chance to do our experiment right. Therefore, we decided to read the instructions carefully and made a few changes. We used a smaller bottle and only used red food colouring and unfortunately, we had used all the vegetable oil so we decided to use olive oil, which according to Diarmuid’s mom is the same apart from a minor taste difference. The first thing we did using a funnel was poor some olive oil ¾ of the way. Then in a small plastic cup we mixed a bit of water with 5 drops of food colouring and then stirred until we got a vivid red colour. We then added it into the bottle. Do you know what happened? The oil and water wouldn’t mix because they are immiscible .Then to create a lava lamp we added a couple of rubex tablets and the water and oil started to fizz up making a lava lamp which lasted for about 5 or 6 minutes. We then presented our experiments to the class. I had lots of fun doing the experiments and I think that science week 2016 will go down as one of my favourites. 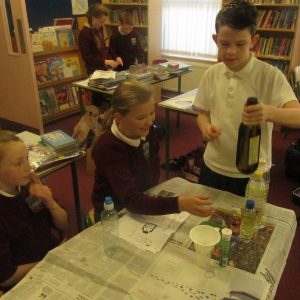