Saturn is the sixth planet from the Sun and the second largest planet in the Solar System, after Jupiter. The average distance between Saturn and the Sun is over 1.4 billion kilometres. With an average orbit speed of 9.68km/s. It takes Saturn 10,759 Earth days (about 29 and a half years) to finish one revolution around the Sun. Saturn is named after the Roman god of agriculture and is astromical symbol represents the gods sickle.

Saturn’s interior is probably composed of a core of iron-nickle and rock. This core is surrounded by a deep layer of metallic hydrogen, an intermediate layer of liquid hydrogen and liquid helium, and finally a gaseous outer layer. Saturn has a pale yellow colour due to ammonia crystals in its upper atmosphere.

Electrical current within the metallic hydrogen layer is thought to give rise to Saturn’s planetary magnetic field, which is weaker than Earth’s but has a magnetic moment 580 times that of Earth due to Saturn’s larger size.

Saturn’s magnetic field strength is around one twentieth of Jupiter’s. Wind speeds on Saturn can reach up to 1,800km/h higher than on Jupiter but lower to the ones on Neptune.

In January 2019, astronomers reported that one day on Saturn has been determined to be 10hrs 33mins and 38secs, based on studies of the planet’s C ring.

At least 62 moons are known to orbit Saturn, of which 53 are officially named. This does not include the hundreds of moons in the planet’s ring. Titan, the planet’s largest moon, and the second largest moon in the Solar System, is larger than the planet Mercury, although less massive, and is the only moon in the atmosphere to have a substantial atmosphere. 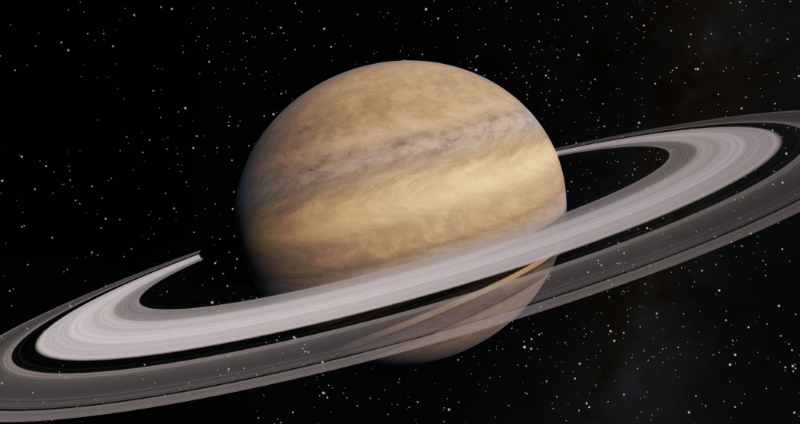