All About The Science Of Sound! 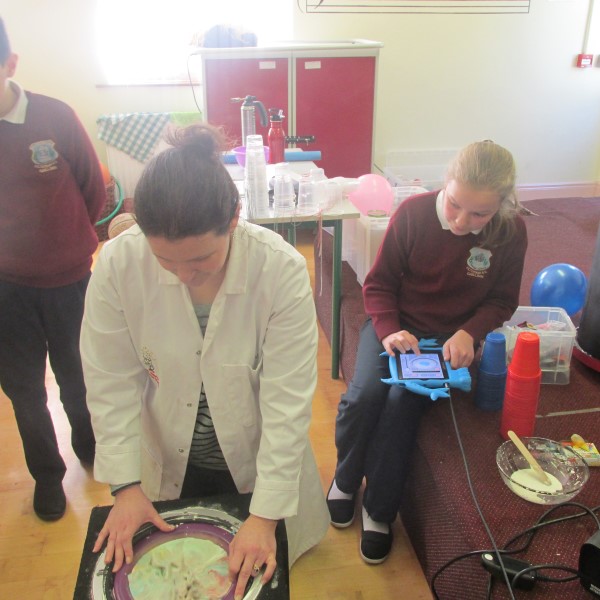 All About The Science Of Sound!

Today, on the 22nd of November Dr Naomi Lavelle visited our school. She is a scientist and she told us all about the science of sound!

We hear sound with the inside of our ears. Sound travels through the air as something called ‘sound waves’. Dr Naomi taught us how different sounds can be used in different ways.

In her first experiment she had two balloons. Inside one there was a 1 cent coin. In the other there was a ‘hex nut’. It is the nut which you put on a screw. She spun the balloons round and round and they each created a different sound.  Although the hex nut was smaller it created a louder sound. Before we knew this we guessed which object would create the louder sound. I guessed the hex nut would make the noisier sound and I was right!

The next experiment was made using a plastic cup, a paperclip and a wet string. There was one small hole in the bottom of the cup which was there for the string to go through. The paperclip was outside the hole and stopped the string falling through the cup. When you squeezed down the string while it was wet it made a sound like a duck or even something very rude! This happened when the string was being pulled it made the cup, the paperclip and the sound waves vibrating in the air inside the cup shake which made the strange noise.

For the next experiment Naomi did the same thing but       with different sized containers. Six volunteers came up and took a container each and in turn they squeezed and pulled the string. We observed and listened to the sound each made. We decided which container made the lowest, deepest noise. We learned the deepest sound was made with a long container, better still with a bit of cardboard and a bit of wood. I think Liam won the ‘deepest sound’ with his but there were some very deep sounds!

We had a great visit from Dr Naomi and we learned lots about the science of sound from her! She’s so good and she even has her own website. Check her out on sciencewows.ie! My most interesting fact was that the science of sound could be used in wars as a weapon! I am really glad she came to visit!