On Tuesday the 26th of May some students from 1st to 6th class travelled to Dangan to participate in in a schools athletics competition. We initially ran off an internal event in our school to pick the pupils who would represent Kiltiernan.

It was an early start for competitors as we had to leave our homes at 8:00 am to be in Dangan for 9:30 Am. We arrived early so that gave us time to run a lap around the track and warm up. Once the races had begun time flew and before you knew we were ready for the semi-finals. Orla, Grace, Tara, Abbie, Stephen and David had all made it to the Semi Finals. The boys’ relay made it straight into the final. After some very competitive semi- finals Abbie and Stephen qualified for their respective finals. Stephens’s race was on first. He was partaking in the under 11 boys’ 400 metre race. Thankfully he ran a great race and finished 2nd picking up a silver medal- our first of the day. Next Abbie ran in the girls’ 100m sprint. After a tight race she finished an honourable 4th.  The last race of the day saw the boys’ relay team finish a fantastic fifth. Overall it was a fantastic day and we are already looking forward to next year’s competition. 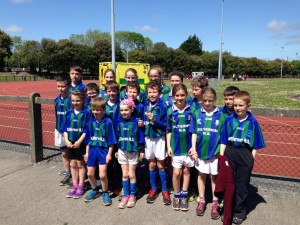 Report on Being a Play Monitor
Scroll to top