During Science Week a man called Noel Murphy who works for Intel came to our school with a 3D printer. First he showed us a really cool video of the future of fireworks. There were lots of musicians playing in an orchestra and instead of fireworks they were using drones. They made different shapes and at the end it made the word Intel in a speech bubble. It was so cool.

Then he brought us into the halla and showed us the actual 3D printer. He used the printer to make us a referee’s whistle. It took about two hours to print the whistle so it worked while we went back to class and we saw the finished product later that day. He also showed us a sample of other different things made on the printer. One of the samples he showed us was of an elephant. He asked us how we thought it worked to print it. He explained 3D printing works by using melted plastic instead of ink and by building the piece up with the melted plastic layer by layer.

The other materials you can use in a 3D printer are plastic, metals, glass and even chocolate! The products you can make are toys, body armour, helmets etc. You can even make body parts like ears noses and organs! The most interesting fact I learned is that you can construct everything layer by layer. The drones shown in the PowerPoint show was so cool because the drones were moving to the music and it showed how they showed the word ‘Intel’.

I enjoyed Noel’s visit a lot and I hope he comes back again. 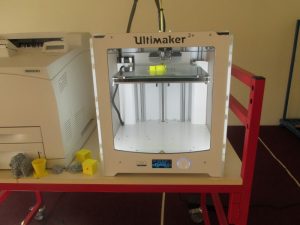 Deirdre, Graphic Designer Came to Our Room!
Scroll to top