On the 24th of May the pupils from second to sixth of Kiltiernan national school were lucky enough to be visited by Brendan Allard from the Marine Institute. Brendan is a marine biologist and works in the marine institute in Renvile. He studies creatures in the ocean.

He came to visit us around 9:30am in the morning. We all gathered into the hall and he explained to us what he does at his work. He also told us how important it was to protect the oceans from pollution.

We left for Traught beach shortly afterwards seeing as low tide was at 10:30 which was when we wanted to arrive. When we got off the bus we split into groups and he gave us all nets. We spent the next hour and a half scouring the rock pools for any signs of life!

By the time we were finished we had found hermit, porcelain, edible, shore and box crabs, though our star find of the day was a butterfish. We also found anemones and periwinkles.

After that we had a quick lunch break and then we finished off the day with a sandcastle building competition.

We all had a great day and at the same time we learned about the ocean and found lots of cool creatures. We can’t wait for another visit from the marine institute! 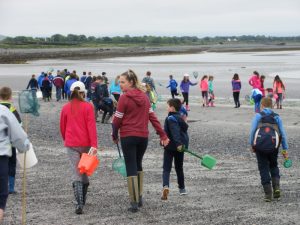